Godfathers of MMA The Book 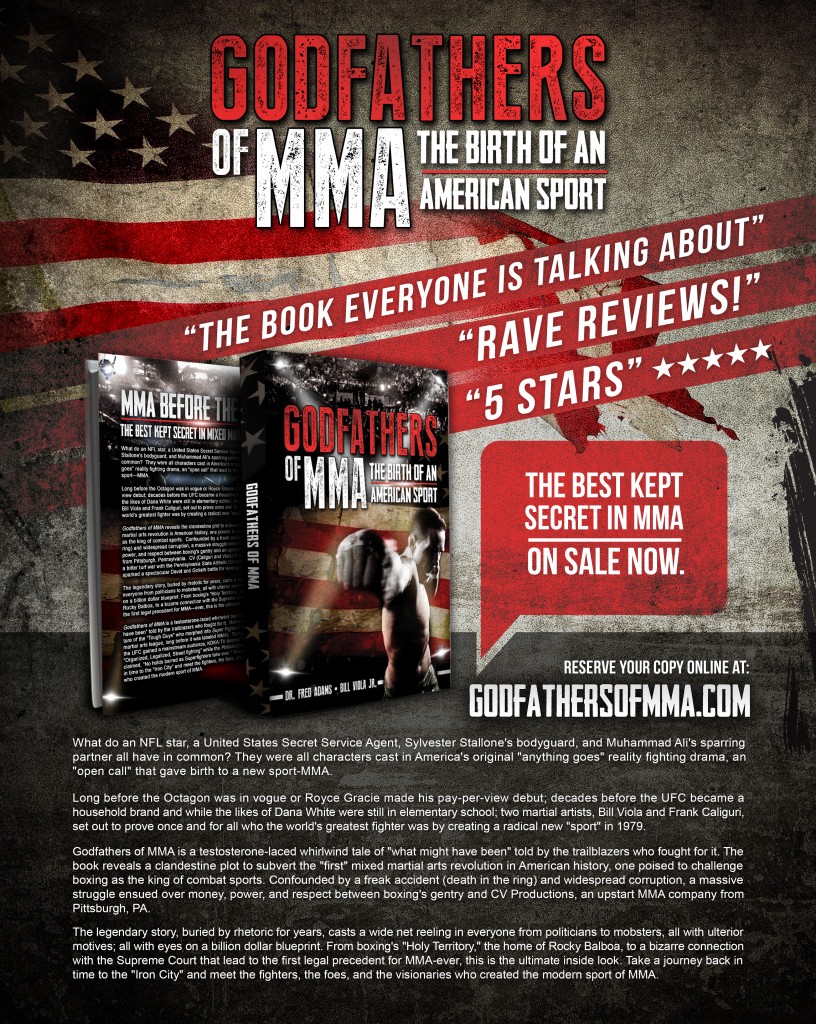 Reserve your copy of the new book Godfathers of MMA today!

What do an NFL star, a United States Secret Service Agent, Sylvester Stallone’s bodyguard, and Muhammad Ali’s sparring partner all have in common?  They were all characters cast in America’s original “anything goes” reality fighting drama, an “open call” that lead to the birth of a new sport—MMA.

Long before the Octagon was in vogue or Royce Gracie made his pay-per-view debut; decades before the UFC became a household brand and while the likes of Dana White were still in elementary school; two martial artists, Bill Viola and Frank Caliguri, set out to prove once and for all who the world’s greatest fighter was by creating a radical new “sport” in 1979.

Godfathers of MMA reveals the clandestine plot to subvert the “first” mixed martial arts revolution in American history, one poised to challenge boxing as the king of combat sports.  Confounded by a freak accident (death in the ring) and widespread corruption, a massive struggle ensued over money, power, and respect between boxing’s gentry and an upstart MMA company from Pittsburgh, Pennsylvania.  CV (Caliguri and Viola) Productions ignited a bitter turf war with the Pennsylvania State Athletic Commission that sparked a spectacular David and Goliath battle for leverage.

The legendary story, buried by rhetoric for years, casts a wide net reeling in everyone from politicians to mobsters, all with ulterior motives; all with eyes on a billion dollar blueprint. From boxing’s “Holy Territory,” the home of Rocky Balboa, to a bizarre connection with the Supreme Court that lead to the first legal precedent for MMA—ever, this is the ultimate inside look.

Godfathers of MMA is a testosterone-laced whirlwind tale of “what might have been” told by the trailblazers who fought for it.  Relive the epic adventure of the “Tough Guys” who morphed into Super Fighters (the first mixed martial arts league, long before it was labeled MMA).  Thirty years before the UFC gained a mainstream audience, KDKA-TV dubbed CV’s new sport, “Organized, Legalized, Street fighting” while the Philadelphia Journal proclaimed, “No holds barred as Superfighters take over.” Take a journey back in time to the “Iron City” and meet the fighters, the foes, and the visionaries who created the modern sport of MMA.